Beer and Wine at Trampoline Parks 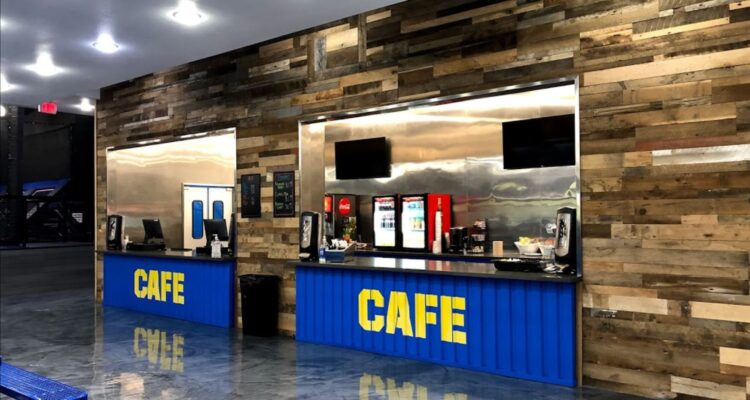 It’s normal to see adult beverages sold at your favorite restaurant and a baseball game isn’t complete without a cold beer alongside your hot dog or nachos, but what about beer and wine at a trampoline park? Is mixing alcohol at a place centered around family entertainment a good idea? If you add alcoholic beverages to your entertainment center how do you keep everyone safe? I mean we all know how clumsy Aunt Jeannie can get after a glass of wine or two.

We wanted to know! Is this a trend, or is beer and wine becoming an expected offering at trampoline parks and other venues that promote active fun?

The best person to answer our questions was one of our favorite trampoline park clients, Daniel Furney at House of Air Crowley. We helped Daniel design, manufacture and install his trampoline park in Crowley, Texas a couple of years ago. We knew that he had added some adult beverages to his café menu shortly after opening his entertainment center, so we called him up and asked!

Thankfully, Daniel was more than happy to give us some insight and shared his thought process behind adding beer and wine to his venue. Daniel commented that his journey began with a bit of research on the topic. He stated that the first consideration was to look at what the entire family entertainment industry was doing regarding alcohol sales.

The more research he completed the more he realized that there aren’t many places that don’t sell some type of adult beverage. Daniel stated, “The family entertainment industry has evolved to be more appealing to the entire family, instead of just kids. Everything from movie theaters to arcades offer their guests an array of adult beverages.”

The next step in the research process was paramount. Did Daniel’s customers want to enjoy a cold beer or glass of wine at his venue? It turned out that answering that question was quite easy. Daniel said that his customers were not only on board with the idea of adding adult beverages to the menu, but that they were actively asking for it. “Our customers saw our full-service café and immediately asked if we would be offering beer and wine.”

Once he heard that his customers were excited about the potential addition of beer and wine, he knew that it was something he should move forward with. Thankfully, the International Association of Trampoline Parks (IATP) Conference was coming up. Daniel explained that the conference was an ideal location for him to speak with others who were successfully selling alcohol at their trampoline parks. Fellow trampoline park owners who attended the conference didn’t disappoint and provided Daniel with tips on how to get started and this solidified his decision to move forward with beer and wine sales at House of Air Crowley.

Daniel explained, “The NO JUMP wristbands are an effective way to keep track of who has enjoyed a beer or glass of wine at our café. Guests are aware that enjoying an adult beverage means you watch from the sidelines for the remainder of the session.” He went on to say that his beer and wine drinkers don’t mind the wristbands and even enjoy a good laugh about their “special wristband”.

In addition to no jump wristbands, all supervisors and café staff at House of Air are required to take a class that provides them with a state license that allows them to serve beer and wine at the park. Daniel also provides additional training to his non-licensed staff through training drills during slow times. “Safety is our number one priority. Our entire team is trained to recognize signs of intoxication. We can’t prevent people from arriving at our park after a few drinks, so we take every precaution we can.”

Glass was another concern that was addressed during our conversation. “We are a big proponent of no glass at the park. Everything we serve is either in an aluminum can or plastic cup.”

Research has been completed. Customers not only love the idea of enjoying wine or a cold beer at the park, but they are also actively asking for it! Concerns about safety have been addressed and a plan has been put into place. It’s time to get the beer pouring!

House of Air Crowley is located just south of Fort Worth and therefore the Texas Alcoholic Beverage Commission (TABC) was the next stop in the beer and wine selling process. We didn’t ask for details on the process for obtaining a beer and wine license but gathered that there were multiple hoops to jump through. Daniel did indicate that it took him about four months to complete the process. He also suggested that anyone looking to sell alcohol at their venue investigate their state’s laws, requirements, and fees before making any decisions.

Our final question was probably the question on your mind right now. Did adding beer and wine to the House of Air Crowley café increase beverage sales? The short answer is ABSOLUTELY!

As we concluded our conversation we went back to our original question. Is selling alcohol at family entertainment centers that promote active fun a good idea? Daniel and I both arrived at the same conclusion. It depends! House of Air Crowley isn’t the first and won’t be the last to successfully sell adult beverages at a trampoline park. It made sense for House of Air to add a selection of beer and wine to their trampoline park, but it may not make sense at your location.