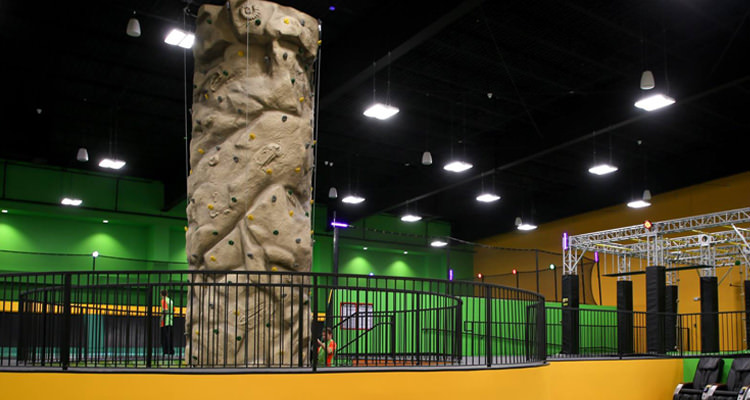 The Rockin’ Jump franchise will soon welcome a new trampoline park in Buford, Georgia. The recently constructed trampoline park is located at 3520 Gravel Springs Road in Buford and is scheduled to open Friday, November 10th.

Husein Khamani, the park’s owner, stated that the entertainment center will include a variety of trampoline and adrenaline attractions including a rock climbing tower, an extreme jump area, basketball slam dunk courts, a ninja warrior course, soft play area for young kids, a 4,000-square foot main trampoline court, a battle beam called the “X-Beam” where parkgoers attempt to knock each other off a narrow beam onto an air bag, two dodgeball courts, and a slingshot air jumper that will allow guest to fly up to 20 feet high.

The design of the trampoline park wasn’t focused solely on the trampoline elements. The park will include upscale amenities like quartz counter tops in the party rooms, a full-service café that will offer menu items that appeal to adults and children, more than 20 televisions broadcasting sporting events and recent news, and a quiet area where parents can relax, work on their tablets and laptops or catch up with friends.

“Parents were a big part of my vision” Khimani said, “I didn’t want them to choose between their kids playing at the park and watching the game on TV.”

Khimani sought the expertise of Best American Trampolines when it came to the design of the new building and the parks layout, design, and installation.

Best American really saw my vision and hit the nail on the head with what I was looking for with this park.

To learn more about the Rockin’ Jump Buford Trampoline Park visit their website or call 678-324-9590.